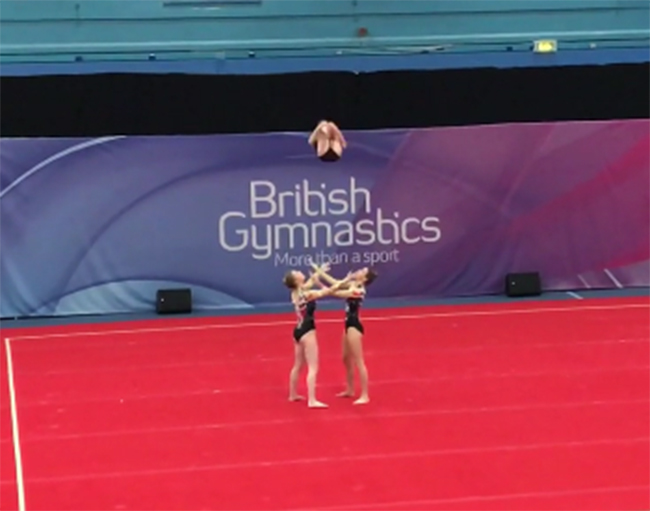 Unfortunately injury plagued many of the gymnasts hoping to compete at the biggest competition of the year – the British Championships. This competition is for performance gymnasts who compete in age group catergories, 11-16, 12-18, 13-19 in women and men’s pair, women’s group, mixed pairs, men’s groups and seniors.

Despite huge disappointment at not being able to compete, many of the HGA performance squad gymnasts went along to Fenton Manor Sports Centre, in Stoke -on Trent, to support the women’s senior trio as they competed in a highly competitive and exciting field at the British Championships.

The women’s senior trio took Bronze medal after a great ‘combined routine’ in the finals of the competition, which gives them an overall ranking of 3rd in the UK. Well done girls!

Our NDP and Performance squads are now busy preparing for the ‘Premlims’ Competition being held in Dartford, on 25th March, which is the precursor to the National Finals in May, for all gold medalists on the day.

For our younger general gymnasts, they are busy preparing for our Club championships on Sunday 4th March 2018, where there will be a chance to show parents their progress. They will also have an opportunity to win medals too. So pop that date in your diary, as the young gymnasts are always proud to show what they have achieved.